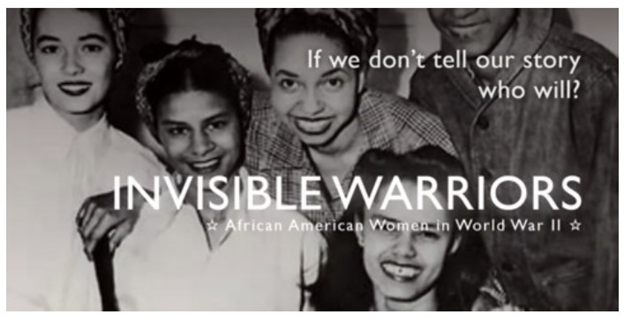 Did you know that during World War II, 600,000 African American women worked in war production, military and government service?

During World War II Black women performed critical factory jobs and equally important work in government offices, as civilians. And like all of the WWII Rosie the Riveter cadre, those Invisible Warriors celebrated in a recent documentary, “were part of the sisterhood of 20 million women who built America’s “arsenal of democracy.” Six hundred thousand Black women filled critical civilian roles in factories and government offices, as well 6,500 who served in military roles as officers and enlisted personnel during the war years.

The women in uniform served primarily in the army as WACs (Women’s Army Corps) and also in the Navy as WAVES (Women Accepted for Volunteer Emergency Service).

It’s a fascinating part of history that is important to raise during Women’s History Month and honor year round. In May of 1941, Dovey Johnson Roundtree, worked with Eleanor Roosevelt, Congresswoman Edith Nourse Rogers, and Mary McLeod Bethune to draft the Women’s Army Auxiliary Corps resolution that was presented to Congress. She went on to become one of the forty African American women who became the first to train as officers in the newly formed Women’s Army Auxiliary Corps.

On February 14th 2022, the Women’s Bureau of the US Department of Labor hosted a screening of “Invisible Warriors” by documentarian Professor Gregory Cooke. The film tells the story of the the 600,000 Black Rosie the Riveters of WWII who courageously fought sexism and racism. The term “Double Victory,” or “Double V” was the rallying cry of Black newspapers, referring to the campaign to fight the war against ethnic oppression abroad as well as racial oppression at home. Women supporting the US military had a third fight, against gender discrimination. (HistoryNetwork.org) The screening was followed by a powerful discussion with both the filmmaker and 97-year-old Susan Taylor King – herself, a riveter during the war. Watch an interview with Ms. King, here.

Learn more about the Invisible Warriors on the documentary website.