From “FIRST TOP GUNS” by Zellie Rainey Orr. A must read for all interested in the untold stories of the Tuskegee Airmen.

When most of us think about “Top Gun,” we usually associate it with Tom Cruise’s character during the ’80s movie showcasing the Navy’s F-14 Tomcat exploits and over-the-top maneuvers. But in reality, it was a Tuskegee Airmen who took part and won the military’s first “Top Gun” style competition The United States Air Force held their “First Ever” Weapons Meet at Las Vegas Air Force Base, Nevada on 2 May 1949. The famous 332nd Fighter Group Team, of Captain Alva Temple, 1st Lieutenant Harry Stewart, 1st Lieutenant James Harvey and alternate pilot 1st Lieutenant Halbert Alexander won the Competition. However, the 332nd Fighter Group was never recognized as the “Winner” until April 1995. Forty-Six years after winning the Weapons Meet.

After the 1986 Hollywood release “Top Gun,” there has been a wide misconception that this country’s first Top Gun Program was developed by the Navy in the 1980’s, competing in F-14 Tomcats. Again, not the case. In fact, the military’s first “Top Gun” gunnery meet originated decades before and was established by the newly formed Unites States Air Force. What is also virtually unknown, is that former Tuskegee Airmen, competing in their P-47N Thunderbolts, would go on to win the USAF very “First Top Gun” Weapons Meet (also known as “William Tell” and “Gunsmoke”) at what would later become Nellis AFB. Note also that these pilots gave accolades go to their Maintenance Personnel, because without them the missions could not have been flown with success. They were the Best in the USAF. Col Harvey, said, “a special thank you is extended to my aircraft crew chief (then Staff Sergeant) Buford Johnson.”

Here is a “Brief” about each of the the 332nd Fighter Group Weapons Meet Team members and their Military Rank at the time of the Top Gun Competition in May 1949. (crediit to http://www.tuskegeetopgun-jharvey.com/top_gun.php) 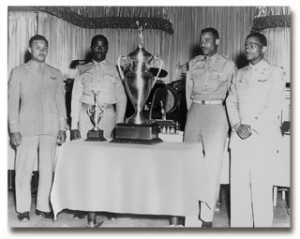 First Lieutenant James H Harvey III, James H Harvey III, was born in Montclair, New Jersey on 13 July 1923 to James Tusketee Airman Pilot Halbert Alexander and Cornelia Harvey. When asked why he wanted to fly says that he was at home one day and a flight of four P-40 aircraft flew over and I said, “I would like to do that one day”, so I tried to enlist in the Army Air Corp and was told they were not taking enlistments at that time. I knew that was wrong, because the Military always needed more people. They didn’t want me because of the color of my skin. I was drafted into the Army in April 1943. I boarded a train in Nanticoke, Pennsylvania bound for Fort Meade, Maryland. When I arrived in Washington, DC I was taken out of the passenger car I was riding in and transferred to the last car where Negroes had to ride. This was my introduction to prejudice and discrimination. I was then sent to Biloxi, Mississippi for thirty days of Basic Training. Upon completion, I was transferred to Tuskegee Army Air Field to start my Pilot Training. I was here for three months going through a classification program prior to entering Primary Training at Moton Field, which belonged to the Tuskegee Institute. After completion of Classification Training I was housed in Sage Hall at Tuskegee Institute. While living here, we had classes at the Institute in the afternoon and flew in the morning and vise-versa. Our classes at the Institute consisted of Math, English, Morse Code, Aircraft, Ship and Submarine identification (enemy and allied), Navigation and hands-on identification of lethal gasses used during World War One that may be used during World War II. 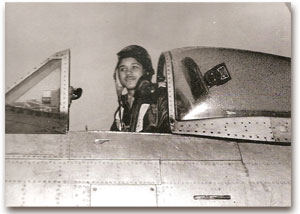 Many Officers in the Army, the majority of whom were from the South, believed in the stereotypes perpetuated by the Army War College Studies of the Negro produced in the previous decade and the War College Reports of 1936. The War College studies and reports were primarily unscientific surveys and interviews of White Officers who cammanded Negro Troops in World War One. According to the studies, Negro Soldiers were “Child Like”, “Careless”, “Shiftless”, “Irresponsible”, “Secretive”, “Superstitious”, “Unmoral and Untruthful” and more than likely to be guilty of “Moral turpitude”. The Negro Soldier was also branded as “A Comic”, “Emotionally Unstable”, “Musically Inclined With Good Rhythm” and “If Fed, Loyal and Compliant”. Since every White Commander had a copy of this report this is how he perceived us. Plus, he had a few unfounded ideas of his own. Keep what I just said in mind. During the early forties the “wash out or failure rate” for White Aviation Cadets going through Flight Training was running at 63%. The “wash-out or failure rate” for the first Cadet class at Tuskegee was 40%. They said, “There is something wrong with this equation”, so they made sure the wash-out rate at Tuskegee was 70% or higher. We were washed out for anything, it did not have anything to do with our flying. Our Flight Training was different than the White Cadets. Everything we did had to be perfect. So when we graduated, we were better than our Instructors. Colonel Noel Parrish our Commander at Tuskegee Army Air Field would go to the White Flying School at Montgomery, Alabama and tell the Commander there that, “We wash out better pilots at Tuskegee than you graduate here at Montgomery”, which was true. Colonel Parrish was a White Military man from Kentucky, but he was behind this program at Tuskegee 100%. This “Tuskegee Experiment” or “Tuskegee Experience” as it was called, was designed to fail. Yes, the whole program was designed to fail. We were out to prove them wrong. We were not just learning to fly for ourselves, we were out to prove that we, as a Race of People can do anything they can do, but only do it “Better”.

Captain Alva Temple was born in Carrollton, Alabama and studied Agricultural Education at Alabama A & M University. After college he went into the Army Air Corp and then to Tuskegee for Pilot Training. He graduated in class 43-G and subsequently assigned to the 99th Pursuit Squadron. He completed 120 Combat Missions over Europe. Alva retired from the USAF with a rank of Lieutenant Colonel and owned his own business for years and died 28 August 2004 at the age of 86. 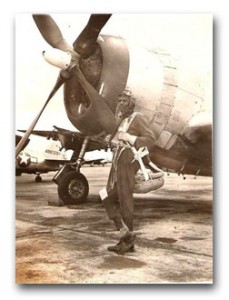 First Lieutenant Harry Stewart was born in Newport News, Virginia and had a fascination with aviation. At the age of 17 and aware that he might be drafted into the Army, Harry took a Military Exam designated to identify potential pilots. He passed the exam and entered Flight Training at Tuskegee, Alabama. Harry graduated in class 44-F and subsequently assigned to the 332nd Fighter Group. On 1 April 1945, Harry shot down three ME 109 German Aircraft and was awarded the Distinguished Flying Cross.. He received an Honorable discharge in 1950 and stayed in the reserves and retired as a Lieutenant Colonel. Stewart attended the Evening Division of NYU’s College of Engineering, earning a Bachelors Degree in 1963. He served as President of the Student Council and Chair of the American Society of Mechanical Engineering. In 1976, Harry joined ANR Pipeline Company in Detroit as Vice President. In 2005 he was asked by the Historical Museum in Detroit to serve as a Pilot of their three Motor Gliders. In a short time he acquired a Commercial Glider Pilots License. He currently lives in Bloomfield Hills, Michigan with his wife Delphine.

Staff Sergeant Buford Johnson was born on 30 August 1927 in Longview, Texas. He spent his adolescence growing up in Shilo, Texas. At age 18 Buford was drafted into the Navy, but he had other ideas and enlisted in the Army Air Corp. After completing Basic Training at Sheppard Field Texas, Buford was assigned to the 99th Fighter Squadron of the 477th Composite Group at Godman Field, Kentucky. Buford quickly advanced to the rank of Corporal and within three years attained the rank of Staff Sergeant. The highlight of Buford’s association with the famed Tuskegee Airmen came during the later part of April and first part of May 1949 when his P-47N was one of the four aircraft selected to be used in the “First Ever” USAF Gunnery Meet at Las Vegas AFB, Nevada. Representing the 332nd Fighter Group were Captain Alva Temple of the 301st Fighter Squadron, 1st Lieutenant Harry Stewart of the 100th Fighter Squadron, 1st Lieutenant James Harvey of the 99th Fighter Squadron flying Staff Sergeant Buford Johnson’s highly maintained P-47N Thunderbolt and alternate pilot 1st Lieutenant Halbert Alexander. 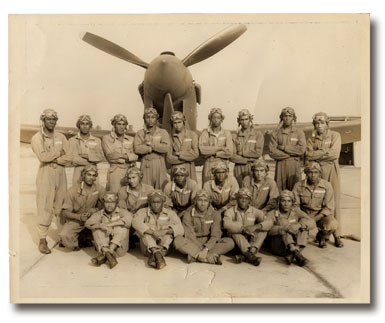 Staff Sergeant Buford Johnson was sent from Lockbourne AFB, Ohio to Itazuke, Air Base, Japan. He was assigned to a P-51 Fighter Squadron and his skills and expertise earned him the privilege to maintain the 80th Fighter Bomber Squadron’s first F-80C aircraft, which made him a trailblazer. Also, he was the first African-American jet mechanic and Crew Chief in the United States Air Force and the first African-American Jet Crew Chief to serve in a Combat Zone.

Technical Sergeant Buford Johnson ended his combat tour in Korea on 19 December 1951. In January 1952 he was assigned to the 6520th Test Support Wing, Air Force Cambridge Research Center, Hanscom AFB, Bedford, Massachusetts as an Aircraft Maintenance Supervisor. On 1 April 1953 Technical Sergeant Buford Johnson was promoted to Master Sergeant after Serving seven years in the USAF. Unheard of in the Air Force today.

Master Sergeant Buford Johnson remained at Edwards Air Force Base until July 1965 when he was assigned to Oxnard Air Force Base, California as the Non Commissioned Officer in charge of Maintenance Control, where he remained until his retirement in August 1966 after serving 21 years of Faithful and Conscientious Service to His Country.

First Lieutenant Halbert Alexander (alternate pilot) graduated in Tuskegee class 44-I, 20 November 1944. He was eventually assigned to the 99th Fighter Squadron. Alexander was killed in an F-86 Aircraft accident over one of the New England States.