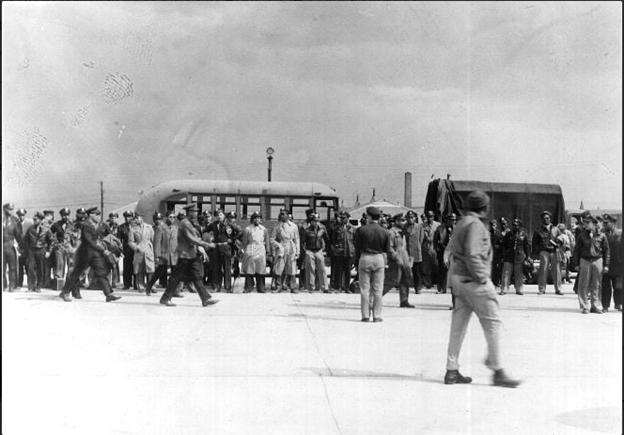 Lt. Col. Warren was one of the 101 arrested at Freeman Field (as was former TAI Chicago president Roy Chappell). He wrote a book, The Tuskegee Airmen Mutiny at Freeman Field, to finally tell the true story of what happened. His book became possible after he found out about transcripts of actual phone calls and meetings were declassified. Shortly after the publication of his book, Lt. Col. Warren noted, “the Air Force chose to exonerate all airmen who had participated in the Freeman Field Mutiny.”
During the 1995 Annual Convention of Tuskegee Airmen, exactly 50 years after the mutiny, the Air Force made its formal announcement.”

Thanks to Jim Warren, son of Lt. Col. James C. Warren, who shared this summary of the Freeman Field Mutiny

With the outbreak of World War II in 1939, the United States Armed Forces began recruiting greater numbers of African American men for segregated “Negro units.” By 1941, the Army Air Corps formed a fighter squadron of 47 officers and 429 enlistees to train at Tuskegee Field in Alabama. This group was known as the 99th Pursuit Squadron. Later, they became known as the 332nd Fighter Group. They also expanded into the 477th Bombardment Group (Medium). They later became known as the Tuskegee Airmen.

Starting in 1943, the 332nd Fighter Group saw action in North Africa and the Mediterranean; the 477th Bombardment Group (BG) “fought a more insidious war at home.”

The 477th BG moved from Selfridge Field, MI (by surprise) to Godman Field, KY, under the guise of relocating them to a location with better flying weather. The unit was later moved to Freeman Field in Seymour, IN, which had better-flying facilities, but amidst racial tension over Black officers being denied entrance to “Officers Club # 2.” This racial separation violated 1940 Army Regulation 210-10, outlawing segregated clubs.

A second club was set up for Black officers: the officers called it “Uncle Tom’s Cabin” and refused to patronize it.

To get around Army Regulation 210-10, First Army Air Force lawyers wrote a new regulation, Base Regulation 85-2, to justify segregation, claiming conditions other than race. It stated that certain clubs and recreation facilities were for Supervisors and others for Trainees. However, Supervisors meant white officers, and Trainees were Black officers. How did they consider officers from the 332nd FG with Distinguished Flying Crosses and Purple Hearts on their chest to be classified as trainees?

The officers challenged this unequal treatment by entering the segregated “supervisors” club on April 5, 1945.

Approximately sixty airmen were arrested, with more arrested on April 7 and 8. On April 10, upon being ordered to sign an endorsement to the new Base Regulation 85-2, 101 officers refused and were arrested for Violation of Articles Of War #64: Disobeying a Lawful Order of a Superior Officer. They were rounded up and sent back to Godman Field.
When they disembarked from the planes at Godman, they were met by Military Police armed with machine guns. To make matters worse, they were laughed at by Axis Prisoners of War, who seemingly walked around the base without supervision.
Intense pressure from civil rights organizations, along with President Roosevelt’s death, led to the release from arrest of the 101 officers. One casualty of the rebellion was 2nd Lt. Bill Terry. Terry was convicted of jostling the Officer of the Day upon entering the club. He was fined $150 and dishonorably discharged from the Army. As a result of the controversy, the War Department revised regulations on segregation and ended segregated officers’ clubs.

Since then, the mutiny at Freeman Field has been viewed as a “bellwether for integration of the U.S. military.”

In 1995, the Air Force corrected the records of the men who requested that the Letters Of Reprimand placed in their military records by General Hunter be removed, and they also set aside Terry’s conviction.”